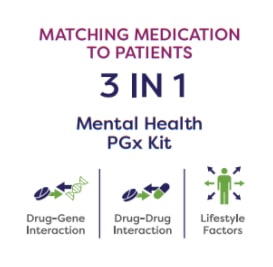 Obtaining therapeutic benefit from a medication is dependent on the functioning of metabolic enzymes and key transporter and receptor proteins at the biological site of action.

Each IDgenetix test analyzes genes and gene mutations with a demonstrated role in influencing medication response, including efficacy or adverse events.

What did your Clinical Trial Data Show?

Below is the summary of the AltheaDx randomized controlled trial that showed using IDgenetix® improved patient’s clinical outcomes with statistical significance. 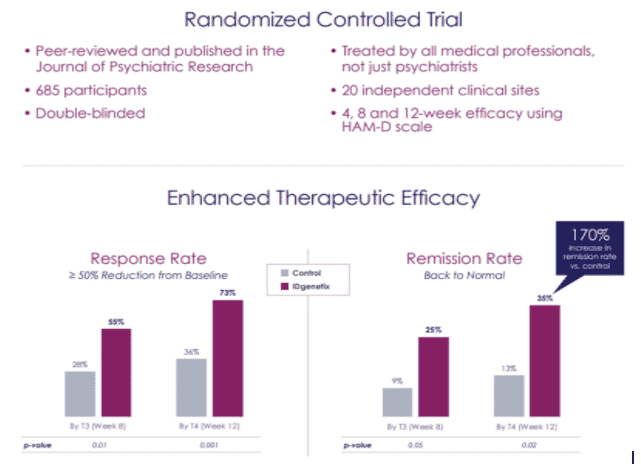 What are alleles and why does a larger number make a difference?

Each person has two alleles that are inherited from each parent. Alleles are variations of a gene that determine our phenotype.

Resources
Is it Cost Effective to do IDgenetix® testing?

Based on our pharmaco-economical RCT, the direct and indirect cost of depression is about $30,000 annually per patient. Indirect costs such as loss of job and suicide takes a huge toll on not just the patients but the patient’s families and the healthcare system. IDgenetix® has shown to save each patient about $6,000 per year by personalizing patient’s medications based on their genetic makeup.

Source
What are the major phenotypes? How are different phenotypes used to map medications to individuals who metabolize drugs differently?

Individual patient response to medications is influenced by genetic variation in the enzymes responsible for drug metabolism as well as targeted receptors and transporters. The family of cytochrome P450 genes code for enzymes responsible for approximately 80% of phase 1 drug metabolism. Genetic variation of these genes alone is estimated to influence 20-25% of all drug therapies to the extent that outcome is affected. [1]

Why is this important? Variations in metabolism can cause life-threatening toxicity in one patient and reduce drug effectiveness in another.[2]

Clinically significant genetic alterations in the cytochrome P450 (CYP) genes can result in decreased or increased enzyme activity. These alterations in enzyme function are categorized into four phenotypes.

Knowing a patient’s metabolic phenotype and its impact on drug metabolism can empower clinical treatment decisions, increase drug efficacy, and reduce the risk of adverse events.

Poor Metabolizers (PM) have severely reduced or no functional capacity to metabolize substrate medications. Poor metabolizers are at risk for side effects due to toxic drug accumulation and may require lower doses.

In contrast, Ultra-Rapid Metabolizers (UM) typically carry multiple copies of the same gene and have elevated enzyme activity and may need increased drug dosing or decreased drug dosing, in the case of pro-drugs, in order to offset the higher rate of metabolism.

What did we learn from the Star*D trial about medication response in depression?

Based on the largest depression study conducted, funded at 35 million US dollars, the STAR*D Trial showed that about half the patients do not respond on the first round of treatment for depression. Using IDgenetix® as a tool to help guide therapy rather than the traditional trial-and-error mental health prescribing is key in getting patients mentally stable sooner.

Source
Where can I get more information about the genes on IDgenetix® panel?

We have our own educational channel on YouTube called IDgenetix® TV with tons of relevant educational Pharmacogenomics (PGx) pearls that you can listen on at own time. Our MSL who is an expert in PGx can speak with you on an individual basis regarding any questions you may have or review your patient’s IDgenetix report with you. For ease and efficacy, please use the Calendly link to set up a personalized session with our MSL, Behnaz Sarrami, MS, PharmD.

Set Up a personalized session
Which psychiatric drugs are included on the FDA’s Table of Pharmacogenomic Biomarkers in Drug Labeling?

Many psychiatric drugs are metabolized by the CYP enzymes, including 2D6, 2C19 and 2C9, which are genes included in our IDgenetix® tests. The CYP2D6 enzyme, for example, primarily or substantially metabolizes a number of selective serotonin reuptake inhibitors, or SSRI, serotonin-norepinephrine reuptake inhibitors, or SNRI, and tricyclic antidepressants or TCA, which are, according to IMS Health, the three most-commonly prescribed drug classes in psychiatry, as well as antipsychotic drugs.

Our neuropsychiatric tests also include variant analysis for informative receptor and transporter genes associated with clinical response to psychiatric drugs and risk of side effects, such as SLC6A4 and HTR2A, which are important factors for psychiatric drugs.

Twenty-four psychiatry drugs are included on the FDA’s Table of Pharmacogenomic Biomarkers in Drug Labeling as having PGx information in the drug labeling.

What are your lab accreditations?

IDgenetix® Tests are processed in a CLIA Certified and CAP (College of American Pathologists) Accredited Molecular Diagnostic Laboratory authorized to offer its IDgenetix tests in all 50 states.

Please register below or contact our customer service center at 1-855-MY-PGX-ID (1-855-697-4943) or support@idgenetix.com, or speak to your local IDgenetix® account manager to set up an online account and obtain IDgenetix® sample collection kits.